Away from the political alignment in the axes of the confrontation in the region and the world, it is possible to stop in front of what has happened in Riyadh summit with respect to characterization and analysis to discover the new things which were given by the conference held in Riyadh under the title of US-Islamic-Arab partnership, and to discover the extent of the conformity of the announced goals with what is revealed by the positions of those who hold this assembled festival, and then estimating what is wanted by the Saudi and the American depending on the main answers of the main questions.

No one in the light of the positions known by the parties and the expected goals of the conference, along with the wars which were ignited in the region can expect that the Palestinian cause and the ways of its solving be a central issue of the Arabs and the Muslims in the meeting with the country which forms the first source of funding, weapons, and the diplomatic protection to Israel, as it is not possible to expect that the condemnation of Iran and Hezbollah will not be one of the most prominent subjects of that conference, due to sole reasons that belong to both the American and the Saudi sponsors and for many other reasons between them.

What is new is the move from condemning Iran as a country that is being beheld the responsibility of sponsoring local parties in the Gulf countries, and considering it an interference in the internal affairs of these countries, as well as the accusation of Hezbollah as Iran’s ally which is responsible for the main part of this task on its behalf, and the characterization of that with terrorism as an expression of the political negotiating escalation to a new stage in which  the title of the war on terrorism becomes dedicated to Iran as a main goal and ISIS as a secondary goal, and where Hezbollah and Hamas Movement become equal to ISIS, with the exclusion of Al Nusra front and ISIS from the list which their mentioning is not possible to be inadvertent in such a discourse of each  the Saudi King and the US President.

According to the new discourses, the approach is no longer carried by considering the war on ISIS a priority as stated in the inaugural speech of the US President, but the objection of the expansion of the influence of each of Iran and Hezbollah under the slogan of this war, and the convergence with Israel is to stop these two influences separated or assembled. So every war on ISIS that does not coincide with a war on the Iranian influence not only on Hezbollah, but on the resistance movements is a wrong war, this is exactly the Israeli concept.

The Palestinian cause and the sectarian attraction are no longer considered the crucial elements in feeding the terrorism in the incubating background, moreover, to consider those who are concerned of confronting or solving the Palestinian cause or ending the secretion strife are no longer accompanying conditions to measure the seriousness in the war on terrorism, while getting rid of the Palestinian cause as a burden that delays the alliance with Israel and igniting the wars and the sectarian strife as a source of mobilization against Iran and Hezbollah have become required conditions in the concept of the new war.

Instead of strengthening the power for a negotiating situation with Iran in order to prevent the strife, and to get rid of the incubating background of ISIS and Al-Qaeda by claiming the defense of a doctrine against doctrine, the words of the Saudi Crown Crown Prince become understood about linking the conflict with Iran with the issue of the emergence of Imam Mahdi as a war with the doctrine which tries to smash its followers in Al Qatif and Al Awamiyya even if Al-Qaeda and ISIS become militias of the regime against some of its people.

Does this mean that the American want a war on Iran? Surely, he does not want it, but he felt happy because the Gulf is preoccupied with it. The startled Gulf is the milking cow which Donald Trump talked about in his electoral campaign; he has milked it with five billion dollars that will lead to the Kingdom’s bankruptcy. In the Gulf which is alert to sectarianism and the danger of the imminent strife, Washington’s negotiation gets intensified with Iran, Riyadh is alienated away from the engagement arenas with Tehran as Syria and Iraq, just be sufficient with welcoming the Saudi proposal about forming a reserve force to intervene in them, supported with thanking.

Some Saudis suggested the discount of the Saudi annuity of the frozen deposits in America by the Americans, but the US response was the deposits were frozen under judiciary decision and can be considered a guarantee for payment only.

The Saudi bankruptcy, drowning in strife and the civil war, raising the level of tension with Iran, and leaving Riyadh to Israel finally for a functional mission related to the Israeli concern from the Syrian variables are US goals that coincide with getting all the money to revive the stagnant US economy,  and selling the plants which their US efficiency has ended as the US weapons which do not bother Israel, so what the neo-conservatives said about Saudi Arabia as a prize of satisfaction for their wars in Asia is a continuous ceiling for the coming years. 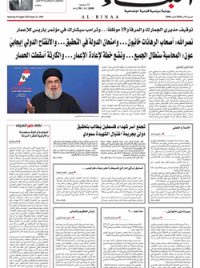