The difference between the UN resolution 2254 about the political solution in Syria and the document of five drawn up by Washington and signed by France, Britain, Saudi Arabia, and Jordan and in which Israel seems a secret partner, and Turkey a half partner is that the US resolution based on a bilateral; the unity and the sovereignty of Syria and it is interpreted in two ways. The first entrance to the political settlement is a unified government that sets new constitution and holds elections. While the second aspect is Syria is unified through its constitutional and central security institutions that ensure the privacies of its components under the constitution and security, and where there are no separated security and constitutional bodies in the demography in Syria. While the document of five calls for a reference under the UN supervision to administer the constitutional and the electoral file, which means to disrupt the working according to the Syrian constitution and ending the Syrian sovereignty, but this cannot be applied without putting Syria under the Chapter VII .because the document calls for a constitutional and security non-centralization of the areas and the components and thus to make Syria under targeting.

Sochi Conference was the start of the political path, it is based on the decisive victory over ISIS which Washington and its allies through a coalition claiming the fighting of ISIS disrupted and tried to sabotage it to prevent the victory of a Syrian-Russian-Iranian alliance with the resistance forces. Knowing that the two pillars of the political path were the unity of Syria and its sovereignty and paving the way for those involved in the war on Syria to participate in the political solution according to the equation of ending the occupation and the separation, as Astana which paved for a similar way under the title of the war on terrorism. It seems clear that the compliance was missing and even negative from the targeted parties; Washington, Paris, Riyadh, and Ankara. On the contrary the alternatives expressed by those are represented in wars and raids launched by Washington for the sharing of Syria as an interpretation of its announced document under the name of the document of the five.

Moscow was keen on its position as a superpower to ensure the participation of the United Nations in Sochi and to get its legitimate cover, moreover, to ensure that there is no contradiction between the paths of Sochi and Geneva, but integration between them, and an attempt to present Sochi results as a reviving of Geneva path. The coming of De Mistura was astonishing despite the American-Saudi escalation with the participation of the parties of the document of five against the path and the conference, and the decision of their associated oppositions to boycott its work. But later it was revealed that the presence of De Mistura was not but an attempt to disable Sochi and to turn it into a platform to launch fire against the Syrian country and to show it as an obstacle in front of the political solution, through making Sochi results close to the document of five.

The formula of the constitutional affairs committee which was approved in Sochi to be in conformity with the UN resolution and the agreed path between Syria and Russia is supposed to be far from two things; the claim that it is an alternative party of the constitutional institutions of the country to draft a new constitution or to make adjustments on the ongoing constitution. The second thing is to make it a body under UN leadership and presidency, and the getting out of Syrian-Syrian equation which the UN contributes in encouraging it , because this means one thing, to proceed in the document of five by making Syria under the UN mandate and to consider it the Syrian constitutional institutions which the results of Sochi and Geneva debates must bypass by in order to be legal and then to be proposed for referendum. These are the two main differences between the UN resolution and Sochi on one hand, and the document of five on the other hand.

De Mistura tries to say that the confrontation between him and the Syrian position on what is called the constitutional committee, its formation, powers, and its presidency is an expression of a Syrian-Russian disrupt in order to ensure the Russian sponsorship of the trap he settled up, but he ignores that what was anticipated by Russia from Sochi has been achieved with the support of Syria, and what is presented now is allocated to Syria and its sovereign responsibility. If necessary, De Mistura will hear the appropriate Russian speech. 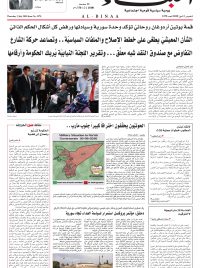