When the Israeli Prime Minister Benjamin Netanyahu is satisfied with the explanations of the Egyptian mediator about the circumstances which led to Palestinian missiles on Tel Aviv because he fears going to war on the eve of the elections after it was an ideal electoral chance, and when neither the American gifts nor the Russian ones benefit in granting Netanyahu the secure decisive winning swaying between one vote and another against a new-born party formed by retired generals who did not present any new political vision, but they manipulate with the words of the Likud, and when Netanyahu begs the voters to go to the polls two hours before they are closed because the voters are not interested seriously in the elections and the participation is less than before then that is enough to know that the electoral fuss is not a sign of strength,,, and that Israel is weaker than a cobweb.

The strength of Israel exists only in the Arab rhetoric that wants to justify defeat, normalization, and what is demanded by America to serve the weak Israel. What cannot be taken by America and Israel from the Palestinians, the Arabs are demanded to snatch. The talk of the Arab rulers, elites, and Palestinian or Lebanese political leaders about the danger of the “deal of the century”, the danger of the announcement of Jerusalem as a capital of Israel, and the American recognition of the annexation of Golan to Israel reflects their fear of the their rhetoric which fell and their position which is swaying, simply because they built their policies on the hypothesis of a settlement with the occupation entity and they see it dispersing in front of their eyes. They see that the US desperate policy from finding a Palestinian partner who signs for the security of Israel paves the way for the equation of the conflict of existence rather than the conflict of borders on which the Arab official and partisan theories based half a century ago. This means; the recognition of those who adopt from the beginning the theory of the conflict of existence.

The most important result of the Israeli elections is the boycotting of more than four-fifths of the Arab voters because the fall of the settlement project has reunited the people of the occupied territories in 1948 with the people of the occupied territories in 1967 and has ended the bets on the lie of the Israeli democracy after the declaration of a Jewish state. Therefore the Palestinians responded by ending the bet on the lie of the western democracy on the remembrance of the fall of Baghdad by the US invasion. 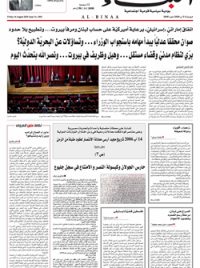